Alan Rosenblatt, Ph.D., is a digital communications and social media strategist, professor & thought leader with over 25 years’ experience at the digital intersection of politics, advocacy, media, and education. He is Senior Vice President of Digital Strategy at turner4D, providing world-renowned training and strategic counsel to organizations seeking to use social and digital media more effectively. Together with Suzanne Turner, Alan founded the Internet Advocacy Roundtable in 2005—a monthly event focused on digital and social advocacy, politics and media. In 1995, he taught the world’s first university course on digital politics at George Mason University and he’s been teaching it ever since. In 1998, Alan co-founded Media Bureau Networks (MBN), a streaming video consulting firm that was the first tech company to open shop in Philadelphia’s Northern Liberties technology district. Under his direction, MBN produced four daily live-streamed talk shows from the 2000 Republican and Democratic National Conventions. Alan later co-founded Take Action News, which created a new genre of news that facilitates action without taking a position. Dr. Rosenblatt is an adjunct professor at George Washington University’s Graduate School of Political Management, Johns Hopkins University and American University, where he teaches courses on digital and social media politics. Previously, he taught courses in digital politics at Georgetown and Gonzaga Universities. From 2007-2013, Alan was Associate Director for Online Advocacy at the Center for American Progress/CAP Action Fund, where he created and directed the Center’s social media program. Alan regularly writes for SocialMediaToday.com and for turner4D’s Carpe Colloquium blog. He previously blogged at CQ-Roll Call’s Connectivity.com, BigThink.com, HuffingtonPost.com and TechPresident.com. Find him on Twitter, YouTube, SlideShare, Facebook, Medium, tumblr, Pinterest, Ello, This.cm and across the web at @DrDigipol and on LinkedIn's Pulse at Alan Rosenblatt. 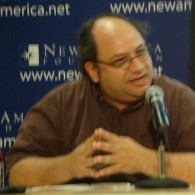 Tune in to Episode 2 of the Dr. DigiPol Show this Thursday, September 8 from 4:00 pm to 5:00 pm to catch Michelle Coyle of Women Get It Done and Lisa Maatz of the American Association of University Women discuss whether or not the presidential campaigns of Hillary Clinton and Donald Trump are effectively engaging […]

No Woman Should Have to Publicly Discuss Their Abortion: The Tale of @TwoWomenTravel

A woman’s decision to terminate her pregnancy is fundamentally private. Who she shares that decision with should be completely up to her. Despite that, some women find themselves in situations where this decision is taken away from them, such as when they have to run the gauntlet of protesters outside a clinic. That said, one […]